The special effects kiosks were built and designed by Trade Show Holograms a company that specializes in sales and rentals of the 3D displays for trade shows across North America. The displays are designed to attract attention to trade shows booths. They feature the companies exclusive Ultra Bright Projection Technology and interactive touch screens.

The dual sided nature of the exhibit allows viewers on each side to view independent presentations on each side without interfering with the opposing side. 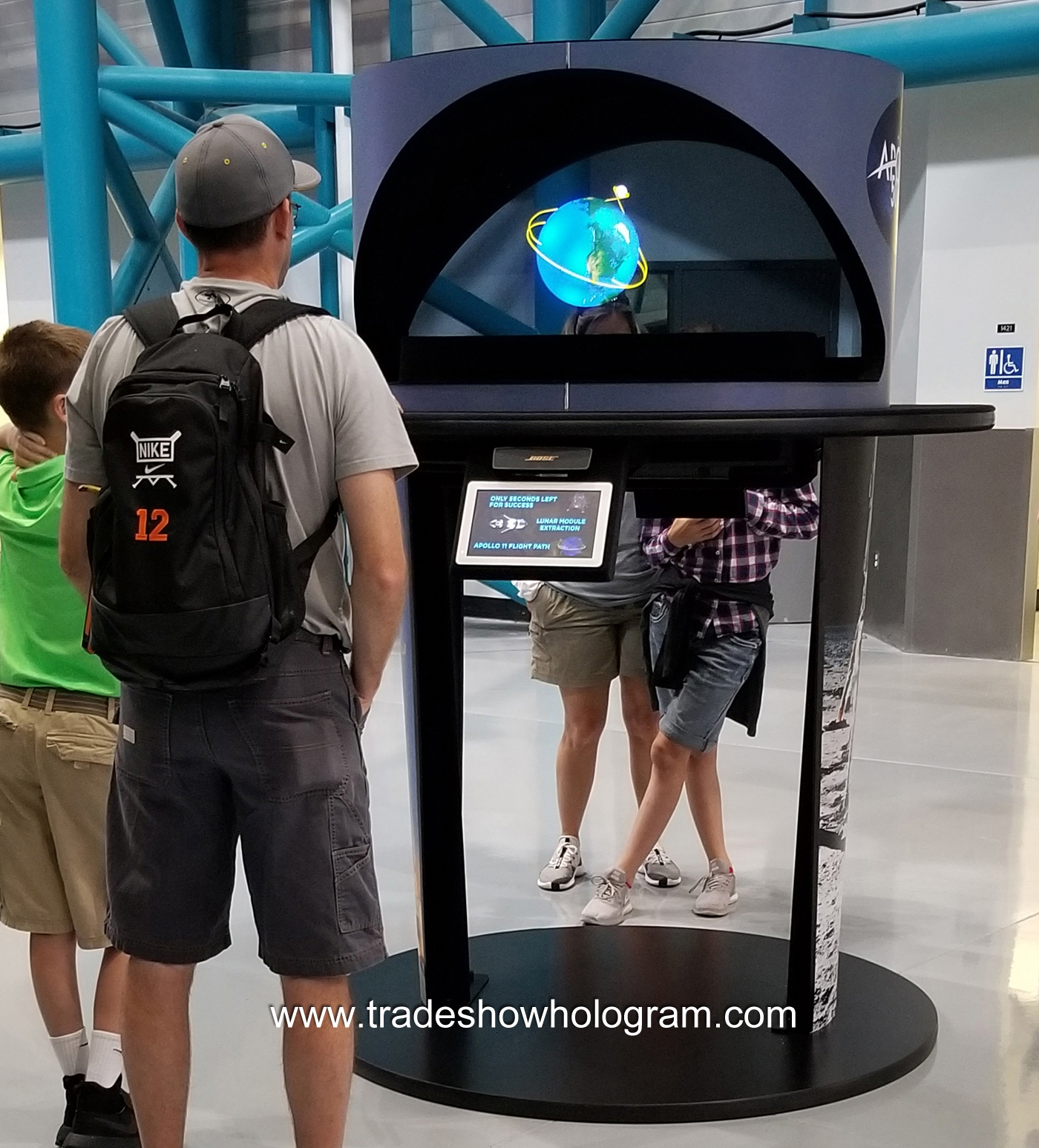 The 3D Hologram Projectors offer a new high tech, modern and visually stimulating way to present historic facts to a modern audience. Visitors simply touch an icon on the interactive touch screen. That activates the holographic presentation which materializes inside the hologram chamber. Descriptive narrative audio accompanies the 3D visual projection to make the presentation for interesting and informative.

KSC visitors can view either of two separate Holograms at the Kennedy Space Center. One is exclusively dedicated to only the Apollo 11 mission and focuses on facts and trivia related to that mission only. The second Hologram projector features interesting facts on the other Apollo missions from Apollo 12 to Apollo 17, the final Apollo mission and the last time Man visited the moon.

Video of one of the Apollo 11 Hologram presentations can be seen on youtube as it is presented at the Kennedy Space Center.

As part of the 50th Anniversary of the Apollo 11 moon landing NASA has installed two 3d holograms at the Kennedy Space Center.  The Apollo 11 hologram projectors showcase elements of the Apollo mission in a 3d presentation format. Visitors to the Kennedy Space Centre can choose from various trivia/facts on a touch screen and watch a 3D holographic presentation that seems to float in mid air before their eyes. The displays were created by Trade Show Holograms  a company that manufactures 3d projectors for trade shows and special events. 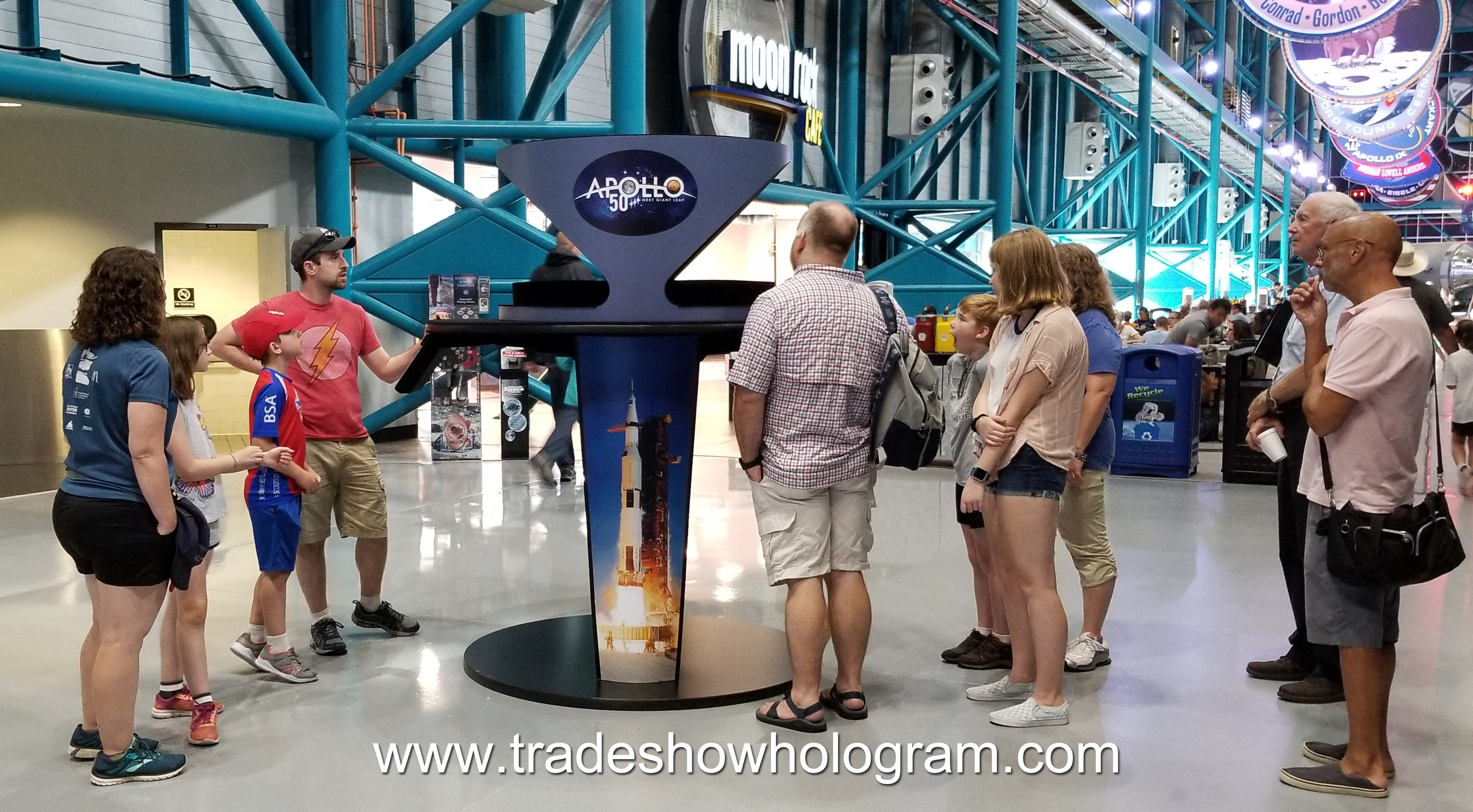 Summer of 2019 marked the 50th anniversary of the Apollo 11 mission. The Kennedy Space Center in Florida installed Apollo 11 Hologram Projectors to inform visitors of mission facts and trivia. The 3D holographic projections offer visitors a new and interesting way to watch mission information. Visitors can learn about the fuel shortage of the Lunar Module which almost forced the astronauts to abort the mission on landing. The missions flight path is also show in 3D.

Did you know the Saturn V rocket included a launch abort system? This system was designed to separate the Command Module that housed the crew from the rocket in case of a problem during launch. The Launch Abort system is explained in one of the featured hologram presentations.

A secondary Hologram Projector was installed to feature trivia and facts the Apollo missions that followed Apollo 11. These additional holographic presentations include how they folded up and took the lunar rover to the moon in the Lunar Module. Also detailed in a hologram is the PTC or Passive Thermal Control maneuver. The space craft was put into a steady and controlled rotation during its trip to the moon to evenly disperse the suns heat. The PTC maneuver was nicknamed The BBQ roll as it resembled the action of a bbq spigot. You can learn about his trivia and much more in holographic form at the Kennedy Space Center.